Start a Wiki
"To hold in my hand, a capsule that contained such power. To know that life and death on such a scale was my choice. To know that the tiny pressure on my thumb, enough to break the glass, would end everything. Yes! I would do it! That power would set me up above the gods! And through the Order of the Sith Lords, I! Shall! Have! That! Power!"~ Darth Bane's last words.

Darth Bane (born Dessel) was the Sith'ari and the Dark Lord of the Sith responsible for creating the Rule of Two. He is the Bigger Bad of When Phineas meet Nobita series. His "Rule of Two" states that there shall only ever be two Sith Lords at a time, a Master and an Apprentice, during the Old Republic.

Originally named Dessel, he was the son of Hurst, a miner, and often mistreated by his father and his coworkers. Hurst blamed Dessel for his mother dying in childbirth, often calling him “bane.” Dessel started working as a miner of cortosis and learned to look out for himself, shutting out the insults of Hurst and his coworkers. Eventually, he started feeling himself drawn to the dark side of the Force. Dessel finally lost his patience with Hurst and got in a fight with him, withstanding his father cracking his ribs without any noise. Shortly afterwards, Dessel imagined his father’s death via a hand crushing his heart. The next morning, Hurst was found dead, Dessel not realizing he’d killed him with the Force. Afterwards, he started standing up to his father’s cohorts and beat them in fights until they learned not to bother him. However, Dessel was eventually attacked by Gerd, a friend of Hurst’s who was drunk and wanted to put him in his place. However, Dessel bit off Gerd’s thumb in the fight and was sent back to town. He took up gambling in the local cantina and won many games, frequently criticizing the Republic. Eventually, Dessel found himself in a down to the wire game with a young Republic ensign and just managed to win. His friend, Groshik, stopped the ensign from attacking Dessel and warned him to be careful, noting how he seemed to constantly twist the soldiers he played against and pass his anger along to the other patrons. Upon leaving the cantina, Dessel was assaulted by the ensign and two soldiers, easily taking them on and even killed the ensign when he tried to pull out a vibroblade with his own weapon, sensing it with the Force. Dessel asked Groshik for help and the Nemoidian managed to help him avoid getting caught and imprisoned, sending him to the Sith Order.

Dessel become a soldier for the Brotherhood of Darkness and joined in the New Sith Wars, eventually became a sergeant. His Force powers made him an even more able commander and his unit came to respect him far more than their commander, Ulabore. The unit was regarded as one of the best in the Sith army, taking on the most important missions. However, at one point they received an order during the Battle of Phaseera that Ulabore knew was a mistake. But he went along with it, fearing the wrath of the Sith Lord who gave the order. Dessel turned on his commander and knocked him out, before taking command, only to be blinded by a flash grenade. However, he found he could still see the enemy troops, unaware it was the Force, and gunned them down. Dessel learned after the battle that Ulabore had reported him to Sith Lord Kopecz. But instead of being punished, Kopecz sent him to Korriban to be trained at the Sith Academy. Dessel decided to reinvent himself and took on a new name, inspired by his father’s mistreatment, Bane.

After became a Sith Lord and destroyed the Old Order, Darth Bane took Zannah as his apprentice, named her Darth Zannah. From that on, he created the Rule of Two, which states there shall only ever be two Sith Lords at a time, a Master and an Apprentice, during the Old Republic.

"Legend has it, in the mystic land of Moraband, there was once a sorcerer so cruel and so evil, that even the gods feared him. Since no prison could hold his soul, he was thrown by the Jedi in to a crucible of molten iron. There his demonic spirite was captured in the form of a great Black Cauldron."~ Dexter about Darth Bane.

When Zannah betrayed Bane, they fight and Bane was killed. His last words states that he would got the power which would set him "up above the gods". His soul was later caught by the Jedi and was imprisoned in the Sith Cauldron. His face is apparently engraved upon the cauldron.

Despite his death, Bane had succeeded in his goal, the Rule of Two continued on for almost a thousand years. Ultimately, it did succeed with the Sith Lords, Darth Sidious and Darth Vader taking over the galaxy and almost wiping out the Jedi entirely. Thus, Bane lived up to the legends that declared him to be the Sith’ari, who would restore the Sith to glory.

Bane’s spirit also once appeared to Jedi Master Yoda when he visited the cauldron, asking if Yoda knew who he was. The Jedi revealed he knew exactly who Bane was and the Sith Lord attempted to convince Yoda to be his apprentice. However, he replied that he was nothing but an illusion and Bane’s spirit was dragged back into the cauldron.

Role in the story

The search for the Cauldron

For untold years, the Sith Cauldron remains hidden while many people with lust for power searches for it. The only one among those is none other then the deathly and malevolent emperor, Darth Sidious, who took the form of "The Horned King" to search for the Cauldron.

The Horned King finally have it in his grasp while his mortal soldiers captured Dexter and Phineas Flynn alone escaped, and return them to the castle. Darth Sidious uses the cauldron to raise the dead and the Cauldron Born army begins to pour out into the galaxy.

Phineas manages to free the captives and Dexter resolves to cast himself into the cauldron, but Phineas stops that and advances himself instead. The undead army collapses. When the Sidious spots Dexter at large, he infers the turn of events and throws the genius boy toward the cauldron, but the magic is out of control. It consumes the body of Sidious (while his spirit escaped) and destroys the castle, using up all its powers, and Darth Sidious was defeated again.

This is not, however, the end of the Cauldron or Darth Bane. Darth Sidious took the "The Horned King" form again. After the battle in Moraband, the Sith Cauldron was placed on a well in Coruscant as the protagonists can't destroy it. Darth Bane was later released by Darth Sidious, using his immortal powers, but they lost the cauldron which is now part of Darth Bane's powers. He soon captured Karuss and, after torturing him, discovered that Phineas Flynn had the cauldron. So he sent the Cauldron Born to find Phineas, kill him, and take the cauldron back to Bane so he could take his full powers again. Darth Sidious also joined forces with Darth Bane, who commanded him to build him an army. Darth Sidious made an army of Great Daleks, but most of them were killed by Dexter in the Battle of Daleks on Paris.

After his defeat, Darth Bane and sent an army of over to Paris to destroy it. The soldiers of Birdpia fought against the army, and were later helped to gain victory by Master Shifu and by an army of soldiers brought by ObiWan Kenobi from Coruscant.

Meanwhile, Phineas and Dexter entered Mustafar. Darth Bane nearly discovered Phineas and Dexter, but his attention was diverted away from them when the army (led by Nobita, ObiWan, Gandalf, Ferb and Luke Skywalker) came to draw out his forces to give Phineas and Dexter a chance to get to Mustafar. Eventually they reached Mustafar, but Phineas decided to take the cauldron for himself (the cauldron controlled his soul) at the last second. Karuss attacked Phineas, taking the cauldron, but overjoyed by his conquest he didn't pay attention and fell in the lava pit along with his "precious". Phineas awake from the control of the cauldron, and was saved by Dexter. This completely obliterated Darth Bane's powers and sent him into the death where the Sith Lords already was.

"I am the Dark Lord who will restore the Sith to glory. They call me Bane."~ Darth Bane.

"Yes, yes my apprentice. Soon the galaxy will be mine. It's evil power will course through my veins...and I shall make you... Darth Zannah. Yes, oh yes. Then, you will worship me! Me... oh, my apprentice, how long I have thirsted to be a god among mortal men."~ Darth Bane explaining his goal to Zannah.

"To hold in my hand, a capsule that contained such power. To know that life and death on such a scale was my choice. To know that the tiny pressure on my thumb, enough to break the glass, would end everything. Yes! I would do it! That power would set me up above the gods! And through the Order of the Sith Lords, I! Shall! Have! That! Power!"~ Darth Bane's last words.

The Sith Cauldron, with Darth Bane's face on it 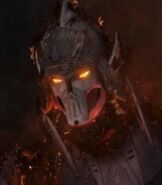 Darth Bane the Sith Lord
Add a photo to this gallery
Retrieved from "https://doraemon-fanon.fandom.com/wiki/Darth_Bane?oldid=7290"
Community content is available under CC-BY-SA unless otherwise noted.